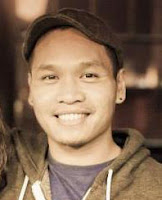 Today we have animator and artist Bobby Pontillas. (Bobby helped on AnimSchool's Animation Principles video, making the great caricature of the Nine Old Men.) He has recently joined the Disney animation department. First of all, congratulations on joining the Disney team, and it was your birthday recently as well.

Thanks very much! Yeah, my birthday was Nov 17th, and what better gift than being given the opportunity to work on a Disney film, right? But really, I'm extremely grateful for all of the experiences I've had so far at Blue Sky, Arena Net, and Gas Powered Games. I've met so many amazing people in this industry!


Mate, you must be loving life right now! How did you end up celebrating?

Yeah, starting over again in a new city is exciting, especially one as dynamic as LA. For my birthday, I ended up going out with some friends at a local wine bar in Los Feliz, and during the day, Disney had a catered Thanksgiving lunch for the studio, so I pretended that was for me.

Where did it all begin? And how did you initially break into the industry?

I graduated from the Art Institute of Seattle in the winter of 2000. Technically, my major was Computer Animation, but what I really wanted to do was become a 2D animator for Disney.  With my portfolio packed with drawings, I got my first industry job at a local games company called Hulabee Entertainment; they did hand-drawn PC games for children. That was a great time. It was a smaller company, and I got to wear a lot of hats: doing storyboards, character design, as well as animation.

Were there any moments in your life where you struggled as an artist/animator? And if so, how did you overcome those days?

I feel like it's almost a daily struggle, but two major ones stand out in my mind. One was making the transition from 2D to 3D animation. The second was making the jump from animating in games to film. Both just came from throwing yourself in unfamiliar territory. Sink or swim, and in both cases I spent a lot of time sinking. I can go into the technicalities of overcoming both, but for anyone reading this, what I really want them to take away from this is that it's all about being stubborn. Never stop. Accept that you aren't going to get it right off the bat, and that's alright.  For me still, I only ever become proficient at anything by making every mistake in the book. Ask for help. Show your work to other artists & animators, both in school and when you break into the industry. For example, working on Rio at Blue Sky, my work would have never stood up to the quality of that film without the mentor-ship of my fellow animators.

Is there such a thing as an overnight animator? For some people they seem to pick it up easier than others, in terms of animation principles like timing and spacing. Or, do you think this is an ongoing process that requires a lot of attention, nurturing, and training?

Yes, I do think a lot of people are predisposed to certain things like a sense of rhythm, a strong graphic sense, or a natural acting ability. But, in order to apply those qualities to animation, I think it's the artists' responsibility to continue to develop these skills. It's also their responsibility to recognize what they're weaker at, and study to become more proficient in those areas.


Let’s talk about your short film: "Better Off Undead," a clever little short film you made a few years back. How did you originally come up with the concept?

I'm a softie, and most of my favorite short films have to do with love. It's so simple and universal! I wanted to follow in that vein and make a film that was sweet, but also morbid at the same time. I had previously drawn this little zombie boy and thought it would be funny to cast him as the lead.  Zombies need love too!


Do you have any advice for artists trying to tackle their own animated short film projects? What were some of the areas you found difficult, and time consuming.

From my short experience I'd say to look at what inspires you, and use that as a jumping off point. If it's a short film, have it revolve around one simple, central idea. I always find that the ideas that stay with people, are the ones they can relate to.

I'll say that I think it behooves any animator to make a short film.  In doing so, you really get a sense for animation's place in the whole film-making process. Sound design, art direction, and layout are all there to help tell the story. Animation is no different. 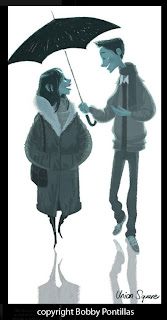 How do your drawing and character design abilities help you with your animation?

It really helps me practice communicating an idea in one “drawing.”  Whether it be a personality or a story point, in the clearest and most appealing way.  When I'm posing in 3D, I'm always asking myself: “Is this how I would draw it?” And if I'm not being lazy, I'll say: “No, of course not” and fight for a better pose.

Mate, I have to confess, I was on your blog the other day and I must’ve went back all the way to the start from 2 years ago, and I NEVER ended up finding one bad drawing. How long have you been drawing for, and is there such a thing as a bad drawing done by Bobby?

Haha, oh I'm sure there are plenty of bad ones in there, but I appreciate the compliment, thank you! It's funny you bring that up, I was cleaning out some boxes full of art school stuff, and MAN, I never realized just how many sketchbooks I filled with terrible drawings. And not even kind-of bad, but just epic-ly awful. I really want to post some of them, you will fall over laughing. We'll laugh together!

Appeal is often a very difficult thing to define amongst animators, and it’s even more difficult to achieve. How would you define appeal and what are some of the things you look for in your shot, or in another artist’s work?

In my mind, appeal is totally subjective. There are no rules. Simply stated, it's what you like looking at. Which could be for a myriad of different reasons. Talking to different artists, they all find different things appealing. It's all over the map. The most you can do, working in this industry, is find out what the majority of your audience finds entertaining. It doesn't have to be status-quo or predictable, people like to be pleasantly surprised. Things that are visually interesting, something that they can relate to, characters they can empathize with, are all examples of why audiences are attracted to certain things.  We're all artists and want to express ourselves, but as story tellers it's important to keep the audience in mind. 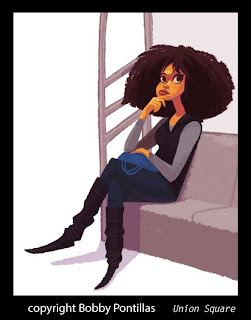 Can you tell us a little bit about your acting choices, what you look for in your video references and what your common workflow is?

When I'm happy with the reference I shoot, overall I try to look for storytelling poses, and timing cues.  Then I push both aspects. On a smaller scale, I'm always on the lookout for little subtle moves like head tilts or weight adjusts, that I would have never thought to put in, had I not gotten up and acted out the scene myself.

We have a couple of questions from AnimSchool students. Peter Kasim asked “how have you divided your time into nurturing both your 3d animation and drawing skills. I tend to do one obsessively and kind of forget about the other…”

The way my career has gone, I do 3D animation all day, and draw at night. I think it's just a matter of having a real love for this medium, in which all of these elements, design and animation, sit together.  Drawing is something that's been with me since I was little. If you love it, you can't not do it, and you'll always find time!

Alexander Ortner would like to know how you chose your storytelling poses and why?

Great question! There are two main components my storytelling poses have to have:
#1- Clarity-  Is the attitude clear without the help of movement? Is it helping tell the story?
#2- Visual appeal-  Having a strong line of action and balance. Making sure all of its parts are flowing into each other, and directing the viewer's eye to where you want them to look. 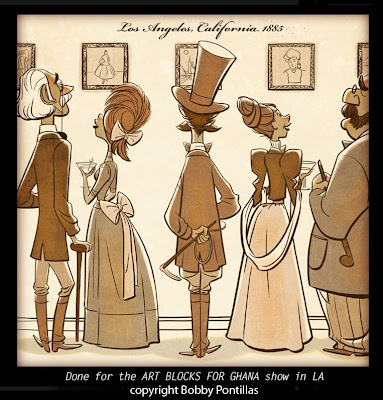 Lastly can you tell us what’s next for you Bobby?

For the coming year I'll be animating on Disney's next feature: "Wreck-It Ralph." I'm also working on an art book with one of my best friends, Joe Lee, on our time in New York! Exciting times!


To see more of Bobby’s work you can visit:
The Art of Bobby Pontillas
"RIO" animation Reel
If you have a favorite animator/artist you’d like us to interview, send me an email at Andrew@animschool.com

Interview by: Andrew Tran
Posted by AnimSchool at 8:50 AM