We would like to welcome Weta Animator, Daniel Zettl. Thank you Daniel for taking part in this interview. Can you tell us a little bit about your background and when you decided you wanted to be an animator? Did you have any traditional 2D animation background when you started? 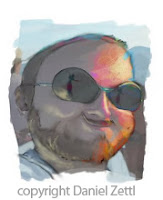 I've drawn and painted since I was little. When I was around 16, I started to do graphic design and graffiti professionally. At the age of 20, when I finished my secondary school, I had an interesting portfolio to apply for an internship at a 2D animation studio in Munich. For me it was the closest to illustrating comic books I could imagine back then. Waiting for a spot to study communication design, I worked my way up within 6 month from a storyboard assistant, to a prop-location and character designer for an animated TV series called Lilly the Witch. My hand drawn animation skills were very basic; I hadn't worked in a production as 2D animator yet. I must say 2D animation was somehow inaccessible and very abstract for me to get interested at first. But, once I understood that drawing for animation is the complete opposite of illustration, and I learned about acting and how to bring a character to life over a series of drawings, animation had my heart and soul! 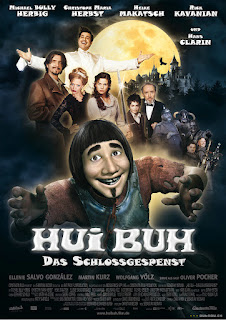 After various design pitches I had done for the studio, I taught myself 3D as a generalist and I had the fortune to get boosted by several animation veterans there. By then, I wanted to learn everything about 3D and get my hands on modeling, rigging and animation. I was offered my first animation position for the German feature film Hui Buh when I was 21 years old. I was part of the character design for the two CG characters, and I even designed and modeled the second character for the movie, a cartoony ghost designed like a pillow. This was also the first time I learned about FACS based facial blendshape systems and implemented this system for the cartoon character. I had the great luck to get under the wings of Tahsin Özgür, a 50-year-old animation director who brought tremendous knowledge from years of experience at Disney. His sense for appeal and cartoon acting resonated immensely with me.

I think your shots from CA Scanline, which can be seen on your latest showreel, are amazing with solid acting, great poses and timing. What were some references or materials you drew upon that influenced you on this shot?  What were some of the questions/thoughts going through your head while working on this shot?

Lissi, this female character is well known from comedy sketches in German TV. The director of this movie is one of the biggest German comedians. He established the character of this princess over many episodes in his TV show, so I kind of knew already a bit of her story. I’m a huge fan of appeal, and that was my main priority for her. I wanted to portray her as the cutest and most girly character I could imagine. But interestingly enough my only reference was the director acting her out for some shots. I absorbed his gestures and timings, his personality and charm. Because in the TV sketches he plays the princess himself, and everybody knows that it’s him in the dress.
In your past blog posts you really hammer in timing, while staying really rough in your first pass, have you always had this mentality as an animator or did you work differently when you were starting out?
I definitely started out less flexible. In the beginning I was heavily influenced by my 2D upbringing. I animated some of my shots in 2D before I stepped to the computer. I would thumbnail and film myself or I dug through film reference so much that when I did my first blocking in 3D, I knew each pose and timing already and I went mostly with my first idea. I drew lots of reference from Disney and Dreamworks movies back then. But, this was for productions that had extremely short schedules and didn’t leave room for lots of iterations. I still do a ton of reference shoots and drawings today and would pitch these, but now it’s more important to react quickly to new ideas about a performance until we found the perfect one. Good timing is the baseline for any concept though, so this still accompanies me.
You spoke very highly of Shamus Culhane's book "From Script to Screen", what were some of the things you extracted from his book and how did it affect your creative process?

By no means am I a Shamus Culhane expert, I’m just an insanely big fan of his work. I my eyes Culhane found, through several specific exercises, a way to tap into your unconscious. One of these exercises teaches how to switch your creative or logical brain half on and off at will and go wild with ideas, or be as analytic as possible. He provides 3 characters of different designs, brothers I think. You pic one emotion or a specific action, say joy, or anger or shopping- whatever. And once a day you sit down for one hour with a timer and do 1 drawing per minute. That is at least 60 drawings per hour, soon you’ll be doing heaps more and in a quality you thought you could only do with a model. After a few weeks or a month, you're a completely different craftsman. It’s indescribable. You literally can span pages full of poses of one specific topic within a set amount of time in a crazy quality. Along these lines I want to recommend Kimon Nicolaides “The Natural Way To Draw” and Constantin Stanislavki’s books about method acting. The first one teaches you to put your thinking aside and draw only what you see by not looking at your paper while drawing. And Stanislavski teaches how to immerse yourself fully into a character by creating the emotions inside of you and basing them on real experience memory.

In your personal blog, you encourage animators to be comfortable with deleting their work if it's not working out. Can you share with us any personal experiences where you put in a lot of effort on a shot, then scratched it, and had a better outcome? 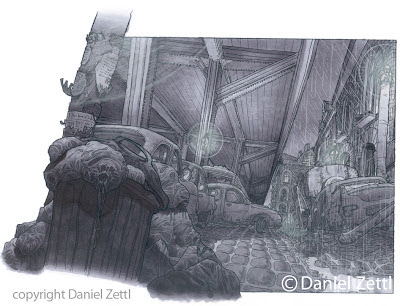 This can happen on every second shot I work on. I pitch a good solid idea, interesting and nice texture but once I hit the polishing phase or once the prior/next shot falls into place and I notice there's one beat to much or the distance the character covers is too long and the shot is too long or too short and the cut doesn’t flow as good, I need to make big changes or delete maybe already polished beats. The cut and flow of the story is really what dictates a change of the performance. In general, when I work really intensely on a shot and want to get it perfect, the best thing is a couple of fresh eyes, who are entirely detached from the shot. Since I started out, and every day again, I try to acquire this “always objective eye” towards my work. I try and preserve this first impression of a shot. This usually leads to the right intuitive decisions, but it can often mean to do big changes.


Well thanks for being apart of this latest AnimSchool interview. 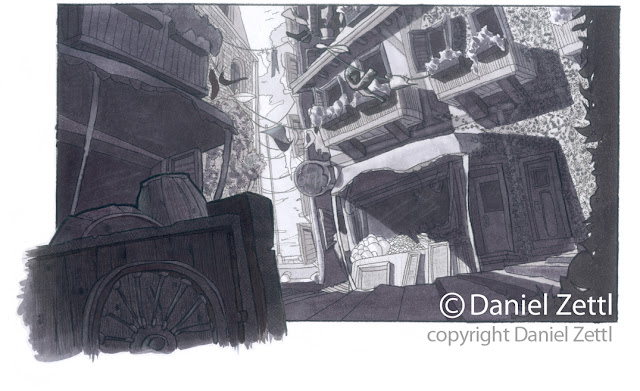 To view more of Daniel's work and current reel check out his website:
http://danielzettl.com/
Interview by: Andrew Tran