Thank you Sabine, for taking the time to answer a few questions for us. Can you tell us a little about your background, what schools you've attended and why you decided to become a rigger? 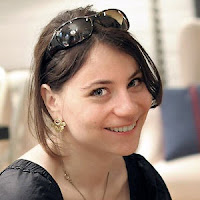 Everything started with my studies in Media System Design at the University of Applied Sciences in Darmstadt, Germany, in the year 2000. At that time, 3D animation had not yet been integrated into the program, and instead, my classes were a mix of design, economics and information technology. After I discovered that I was mainly interested in design and programming, I decided to do a summer internship at IBM: Java programming. Somehow, I realized that this was too dry of a subject for me and I tried to find a field that combined technology and creativity. Since I was fascinated by the early 3D animated movies and short films, I found it in 3D animation! More precisely, in 3D Studio Max which I was learning at home besides my studies.
Excited by this medium, I decided to put all my efforts in getting an internship in Hollywood, which I though would be the best place to start. Of course, I didn't have any connections nor idea which companies where out there, so I looked up a whole bunch of effects companies in the internet and sent over 100 application letters via email. I was lucky and Gentle Giant Studios offered me an internship in 3D scanning.

Afterwards, everything went straight towards a career in animation. I returned to Germany, to finish my studies in Media System Design. After my graduation, I decided that I wanted to deepen my knowledge in 3D animation even further and moved to New York to study towards my Master's degree in Computer Art at the School of Visual Arts on a Fulbright scholarship. After I received my degree in 2006, I returned once again to Germany and worked there for three years as Technical Director at Spans & Partner, an advertising studio in Hamburg. My responsibilities included the development of pipeline tools, special effects, set supervision and also character rigging. Funny enough, even though I always wanted to be an Effects TD, it turned out that rigging was actually what I enjoyed most of all my responsibilities! So, I decided to apply for a Character TD position at Blue Sky Studios when they had an opening in 2009 and voilà, I was lucky and got accepted.


You've worked in commercials and now film. What are some differences you've experienced in the two industries?
One of the major differences is the duration of a project. At a commercial studio for example, you might have a month or even a couple of weeks to finish a project. Also, the commercials are extremely short and whatever character you rig only has to hold up for this short amount of time. At a film studio, it's possible that you work for more than a year on one movie. (By the way, this also means that after three years of working at a film studio you might only have one project to add to your demo reel.) The movies are normally 90 minutes long,  so whatever you do, your character better hold up for a large number of shots.  The quality of your rigs in film has to be much higher than in commercials. Summarizing, working in commercials has the advantage of being able to work on many different projects within a short time. However, the commercial industry is definitely faster paced with less time for detail, and can be quite exhausting.
You started your career working in Germany and currently you're working in the United States. Did you experience any differences with working for an European company vs US company? Were there any programs you had to learn and how hard was it to make the transition? 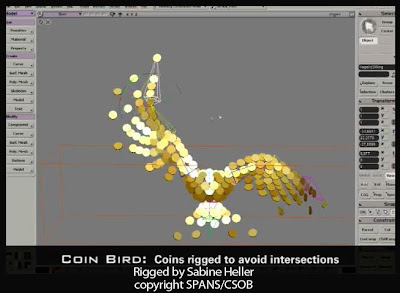 It is hard to answer this question since there are many cultural differences not only between Europe and the United States, but also within Europe, between Germany and France or the U.K., for example. Taking those out of the the equation, I think it mainly comes down to the difference in size. Most of the studios in Germany are small, especially compared to the enormous companies like Blue Sky, Pixar and Dreamworks. Working in a small company is definitely quite different. Normally, one has to be more of a generalist with a specialization to be able to take over other tasks when needed. Often, the responsibility of one single person is much larger than in a company where you are one of a thousand since the hierarchies are much smaller. This is just to name a few...
For me personally, the difference between Blue Sky and my work in Germany was all of the above plus the transition from a commercial to a film studio. At first, I was a little nervous about being able to fulfill the expectations, especially, since I had to switch from XSI to Maya within a week. But luckily, it turned out to be not such a big deal at all.
Congratulations on recently being promoted to Creative Lead for Faces. What new responsibilities come with this role?
Thank you! I am very excited that I have been given this new responsibility. The role of a 'lead' in the rigging department is alternating for every show. Normally, we have four leads, each one responsible for a certain area. The creative face lead, together with the technical face lead and the character development supervisor, determines the standards for all the face rigs on a movie. This basically means, that all the basic controls and functionalities of the face rig are laid out before the actual character rigging starts. This is often done by developing a prototype. The work on the prototype also helps to define the rigging workflow. In addition, the creative face lead creates and updates all the documentation necessary for the rigging workflow. Once this is done, the face lead supports and accompanies every rigger in the rigging process of their character. 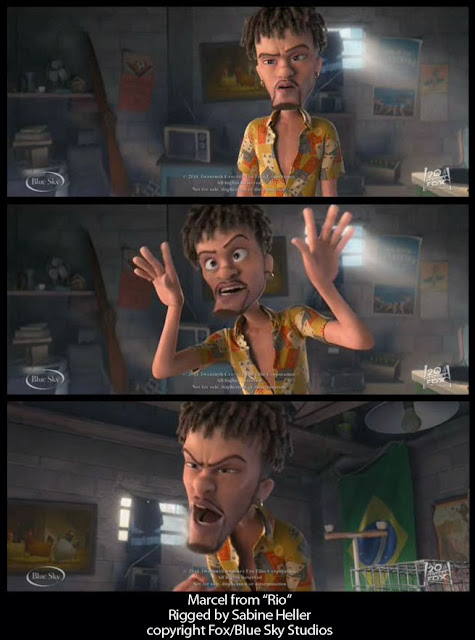 In Rio you rigged Marcel and in the upcoming release of Ice Age 4, you rigged Shira, a Saber Toothed Tiger. Are there any different challenges that come with rigging a bipedal vs a quadrupedal character?

Yes, one of the main differences is that quadrupedal characters have another leg setup. For Shira, the main difficulties were her front shoulders and upper arms. Shoulders are generally not an easy area in rigging and Shira required very special attention, because of the way the shoulder blades move under the skin when tigers, for example, walk. Since Shira is a girl, she had to look elegant and female. Still, she is a tiger and needed to be strong. This turned out to be especially tricky, not only in her shoulder, but also in the face. For example, she needed to be able to show anger, but at the same time you didn't want to loose her femininity. This resulted in a lot of subtle back and forth until it felt right.
Lastly, what is your favorite type of character to Rig and why?
My favorite characters are the ones which provide a challenge. For example, this could be a technical challenge caused by the design which requires some out-of-the-box rigging approach. I have a particular liking for villains or the funny, odd characters. Most of the time, you can give the face a much more extreme range than when rigging a 'good', more 'normal' character.

In AnimSchool's Introduction to Rigging class, Sabine explains the difference between IK and FK.

Interview by: Amber Dempsey Shikuma
Posted by AnimSchool at 10:58 PM