We would like to welcome back 11 Second Club September winner, Aju Mohan. How did you come up with the idea for your "Audition" shot?

If you see my August entry, I did more serious stuff with the dialogue, so I wanted to do something entirely different this time. But, the September dialogue was also too serious, which had me confused for a while. As I was racking my brain for ideas, my dear friend and colleague, Teju Alosyius, pitched me an idea of character doing an audio dubbing in a studio. From there I developed the idea of "Audition."

Tell us about your planning process and what type of reference you used? 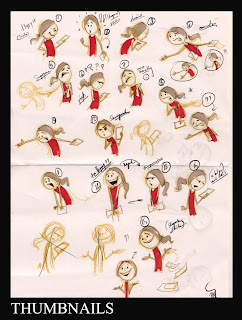 My planning for this shot was pretty straight forward.  I did lots and lots of thumbnails. I wanted to capture the correct expression and feeling in the intial planning stage itself. I researched a lot of audition videos from you-tube and that helped me immensely.

You were able to create an unique look to your entry to make it stand out. What process did you use to achieve this look?

From the initial stage itself I wanted to do something different visually. I was looking at some French 2D animations and wanted to achieve that feel. But, I'm not that much of a drafts man. So, I did the animation using Maya in 12fps, exported the play-blast, and drew on top of every frame so that I could maintain the volume. For rendering, I used the normal surface shader and imported it into a compositing software and merged all the layers. I did a video of my work in progress.

I recently began working as an animator at DreamWorks Dedicated Unit India. On my personal time, I'm concentrating a bit more on my drawing skills. Hopefully I will come up with a 2D animated short-film in the near future.

Thank you Aju, for your time and for sharing your work.
Posted by AnimSchool at 8:18 PM