We'd like to welcome AnimSchool student and 11 Second Club December winner, Lucas Ridley. Lucas, can you tell us a little about your background and what made you want to become an animator?

I began my career in animation a few years after I completed my undergraduate degree in forestry at The University of the South. Through high school and college I filmed sports that I was involved with, like rock climbing and after college I began making films about hang gliding. Some of these videos even won YouTube contests, like one from Hewlett-Packard. I did teach myself After Effects to help create these videos. At this same time, the job I had making ecological maps at a university ended as grant funding ran out. I moved into freelance film making full time and quickly realized I wanted some formal training in visual effects. I went to Vancouver Film School for that, but then fell in love with animation and switched to studying animation there. I've never considered it as a profession for me until then, which was only about two years ago. Now, I've been working in the industry for one year.

But, what made me want to become an animator, was the unlimited potential of the medium. It was when I was learning traditional animation, that I discovered, I enjoyed bringing something slowly to life that didn't exist before I put my energy into it.

When I think of animated films I watched in my childhood, I can always picture moments from The Sword and The Stone, Robin Hood, Pinocchio, Lady and the Tramp, Peter Pan and then later Toy Story and Jurassic Park. Currently, I really loved the animation in Tangled, I also enjoyed Toy Story 3, ParaNorman, Cloudy with a Chance of Meatballs, Rio (being a hang glider pilot it's a must), and all of Miyazaki's films are very imaginative too.

Those earlier Disney movies I mentioned, just had a very dreamy quality to them and I remember having a connection to the characters and feeling like I was being taken on a journey. The newer films all have a range of qualities that makes them appealing to me, now that I see them through the lens of an animator. For example, I really enjoyed the 8-bit character's poppy animation in Wreck-It Ralph and before learning animation that might now have stood out to me.

What artists would you say inspire you the most?

Andy Goldsworthy, Giuseppe Penone, and Joe Downing (the painter) to name a few, there are also some great pencil tests that Andreas Deja posts on his blog that are very inspiring. I'm fortunate to work with many talented artists at Moonbot Studios right now too. We have weeklies where we can see all the work being done at the studio, even if we aren't on those projects. It's really inspiring to see what everyone is producing. We also have Sketch Tuesdays, that's a weekly dose of awesome artwork. It doesn't hurt that I can see Bill Joyce's Cintiq from where I sit at work, so I just have to glance over to see what he's working on to get inspired.

Congratulations on winning the 11 Second Club competition this month. What kind of planning did you do before animating your winning shot, "A Sour History"?

I took several days to let ideas simmer on how to interpret the audio. I didn't sit down and brainstorm, but just thought about it on my drive to work and spare moments during the day. I didn't actually do any thumbnails, although I know it would have helped clarify some ideas. I relied on shooting reference for my planning. I probably spent at least an hour with the audio on repeat, trying many different acting choices. I used the reference for my blocking pass and then once I moved into breakdowns and refining the animation, I left the reference behind.


You created some nice contrast between your characters, both in appearance and personality. Can you tell us how you came up with these choices? 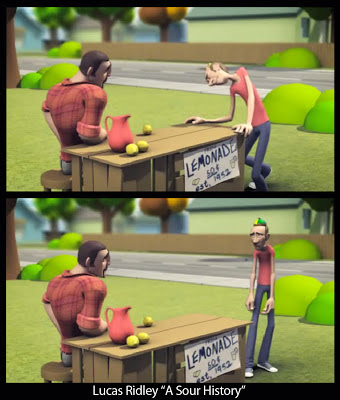 Luckily, these two rigs already had some great contrast built into their designs, which made me excited when I heard the clip because I had been planning on using them anyway. The first rig is my friend's, Dylan VanWormer, and the second is AnimSchool's infamous Malcolm rig. I did add the Little Rascals-style hat to him to emphasize his childishness. I wanted to play off the existing contrast in the audio and have the acting performance reflect the juxtaposition of their personalities. These guys are two childhood friends and the first has grown up to be an adult, but the second guy is still desperately holding onto childhood. I wanted their animation to reflect that.

In shooting reference, I discovered it would be good for the first guy to be handling a lemon, to allude to the punchline moment of the wider shot, and to give him something to sit down and let go of as he made his final decision to 'move on.' This was a representative of his inner monologue that he was physically letting go of the lemonade stand in his hand and in his life. I would not have found that moment without shooting reference.

When I shot the reference for the second guy, I tried to act as childish as possible. There are takes where I went way over the top to get in that mind frame and used the kind of childish attitude of "but I don't wanna!" as a subtext for motivating his performance.

When you completed your 11 Second Club entry, did you believe you had a winning animation?

Not at all, I'm surprised I won. There are still several things I know I could do to improve the shot. The last time I entered I placed 15th, so my only goal was to improve on that and have a learning experience. One of the most appealing aspects of animation to me is that it's an endless pursuit. There will always be something to learn and improve upon and I approach animation not to reach some end goal, but enjoy the journey of constantly trying to better myself in this craft.

You took Body Acting with us at AnimSchool. What would you say was the biggest challenge you faced while animating your shot, "The Suitcase"?

The biggest challenge was the actual pulling on the suitcase. I didn't take great reference of myself for that section. I constrained the hands to the suitcase and then, animated the suitcase so I could make sure it would pivot correctly and then I wouldn't have to counter-animate it, but it was kind of a puzzle to get those things to work together. I think that's where I could improve that shot.

Tell us a little about your experience at AnimSchool.

I was taking the class while I had a full-time animation job and they really complimented one another. It was great to have a mentor continually look over my shot and give it one-on-one attention from broad animation choices to the little details, like Tony suggested to give him a hat to add some texture to the animation. It's also a great community to be involved with, from the Facebook group, to the General Reviews, there's always something going on. After finishing that class I really felt like I had taken a big step forward in my approach and my understanding of animation. That suitcase shot was scary to me and it was great to have the support and guidance of Tony to work through that, as well as seeing all my classmates work, was very encouraging.

There are many aspiring animators looking to improve their work. What advice would you have for them?

Well, I consider myself one of those aspiring animators too, but I think Carlos Baena said at Siggraph that we all have 200 bad shots in us and the sooner we get those out of us, the sooner we can start doing good animation (Malcolm Gladwell's "Tipping Point" mentions the 10,000 hours threshold). I ascribe to this idea of putting in massive amounts of work and started on this path with the understanding that it's going to take time, I have to be patient about it and in time, I will improve. I think some people may be hesitant to tackle certain shots because they're afraid of failing, but those are going to be the shots you learn from the most. When I was first learning animation, I did every assignment twice because I failed on my first attempt. That sounds like a burden, but it's what really helped me overcome obstacles and gain a greater understanding of mechanics. So animate something that scares you, and don't be afraid to do things like the 11 Second Club, it forces you to a deadline and gets your work out there.


To view more of Lucas's work, visit his website: http://lucasridley.com/
Posted by AnimSchool at 8:36 PM