This is a new plug-in that incorporates all the capabilities from film studio "picker" GUIs for selecting and controlling 3D characters.

The features are unparalleled, and it's free to the public for most uses. (Some restrictions apply).

AnimSchool Picker is tightly integrated into Maya, highlighting when you make a selection in Maya, as well as picking from the buttons.
Users can zoom and pan using standard Maya navigation hotkeys.

Reuse pickers in an instant by switching it to another character's namespace. AnimSchool Picker automatically changes all buttons and scripts to update to the new character.

The AnimSchool Picker has been released for Maya versions 2011+ PC and 2012+ Mac. Softimage version likely to follow.

The AnimSchool Picker is offered to the public with restrictions similar to the Malcolm rig: free for most uses except in online animation classes in competition with AnimSchool. It can be used by students of traditional in-person schools and even by professionals and studios. (Other restrictions described here.) 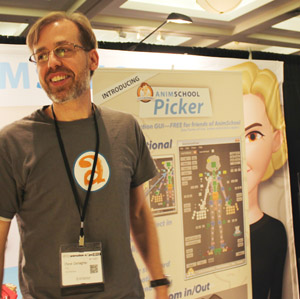 "AnimSchool is committed to bringing the best animation tools to our students and sometimes to the 3D animation community as a whole," founder Dave Gallagher said. "We're so excited to offer this to animation pros, students, and enthusiasts all around the world. Even studios can use our new Picker!" (restrictions may apply.)

Now with over 200 students, AnimSchool was founded in 2010 to bring character-focused 3D animation instruction to students all around the world through live online sessions with the very best film professionals.

Posted by AnimSchool at 1:57 PM