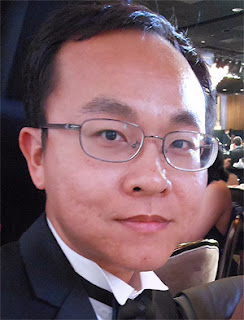 We are very excited to present you Kevin Lan, animator currently working at ILM, who animated Richard Parker (the amazing tiger from "Life of Pi") and several other awesome creatures and characters like The Hulk and Yogi Bear!

Hey Kevin! First of all, could you talk a bit about yourself and what led you to be a character animator?

I am an animator currently working at ILM, before that I was a lead animator at Rhythm & Hues for the past 6 years.

I was not the typical kid that grew up with Disney animation or super hero comics. I was born and raised in Taiwan, where Japanese anime and manga are the dominant culture influence. However I wasn't interested in them until college. During my college years I was totally hooked by all the 80's and 90's anime and manga, through these I also got in touch with experimental animation from Europe and Canada. Anime director Otomo Katsuhiro and film maker Norman McLaren were the major influences for me to want to create animation. Eventually I knew I was going to pursue animation as my career of choice. After I finished my college degree (with struggles of course), I came to the US to study animation in SCAD. It was a time people were talking about 2D being dead and 3D animation is the future. I was very stubborn and decided to focus on 2D animation because of my anime/indie animation root. During my time at SCAD, I was exposed to more Pixar/ Disney style of animation. I think that was the first time I became more aware of "character animation" and started thinking about being an animator in the future.

What was your first job in the animation industry? How did you land the position?
I consider my job at Rhythm & Hues was my first real job in the industry. It was back at early 2007, I had just finished my MFA degree and brought my wife and kid to SF to attend a Pixar class at AAU. So I was learning 3D animation at the same time I was trying to find a job. Time was not on my side because as international students we only had one year to work legally in US. Luckily Rhythm & Hues liked my reel, even though I didn't have much 3D animation in there, they somehow saw my potential from my 2D thesis film and brought me in for Golden Compass.

Your animation on Richard Parker (the Tiger from “Life of Pi”) is pretty jaw dropping. Can you share how much time you spent researching reference and what was your overall process from start to finish of the animated shots?


We wanted to stay absolutely true to the tiger from Life of Pi, which means there should be no anthropomorphization or any guessing from animators. I spent the first 3-4 months studying reference and animating on test shots only. That was the time we figured out how the tiger would behave in different situations, the general physicality and posing, and how the muscle and skin works. Although I was matching reference in these tests, I didn't do it blindly frame by frame. I still tried to find the key frames, analyzing where the force was generated, which control to use, how the force would impact other parts of the body and how the residual energy would be resolved. I also tried to emphasis the realistic motion quality on Richard Parker, tried to limit the usual CG smoothness and put in the imperfections we see in real life. Through these exercise I got a hold of the feeling for the tiger, and eventually I could deviate from reference in my shots and still make Richard Parker believable.

Our general process started with animation director kicking off a sequence and shots.  Then we would compile a playlist of references suitable for each shots and gave those to the animators. If you were lucky enough, you could find a perfect reference and just try to match it. But that was not generally the case. We always needed to piece together segments from different clips and finding creative solutions for the best possible performance for each shots.

I got some of the most challenging shots in the film. Without much similar references I could use, I tried to study all the tiger footages and real tigers in other movies for inspiration, then just imagining how Richard Parker would behave under these unlikely situations. I would block out my shots straight in spline mode, creating my key poses and also putting the correct physicality along the way. I think it's the only way I could know for sure if my idea would work. After the blocking was approved  (usually this took the longest time), I would start adding all the juicy nuances and details on the tiger. While we were working on the shots, the model and rig itself was improving too. So it was a very organic process, and we were constantly improving and changing our shots until the very end.

You also animated a lot of scenes in movies going from Alvin and the Chipmunks 2 to The Incredible Hulk. Do you enjoy taking on projects with different styles from one another?

I definitely enjoy doing different styles of animation. I suppose being an animator means I'm suppose to animate "everything", not being limited to a certain style or characters. Although, I can see myself enjoying more on creature/VFX films recently. Partly because I got recognition from what I did in Life of Pi, also mainly I feel like there are a lot of unknown territory waiting for us to explore. If you think about how many scripts are still hidden inside James Cameron's drawer, and those impossible-to-make-movies may one day become possible, it's a very exciting time for animation and VFX.

Do you have any advice for students wanting to land a job in the animation industry? What would they want to really master before applying to any job in big studios?
I can only talk about VFX industry as I've never worked in feature animation. The situation in today's industry is very complex and much more difficult than before. Being a team player and work hard are the must. I would also suggest animators should master their sense of physicality and try to be original. A good sense of weight and presence of character would benefit you whether you are working in feature animation or VFX. It's the most fundamental thing you will need for the rest of your career. Being original is extremely important in today's animation. I think it goes back to observing real life and experience it yourself. Learning from existing animation is great, but it should just be a stepping stone for you to create your own character, even your own style.
Posted by Guz at 8:26 PM