We would like to present Brian Rashcko, student of the Character Animation Program at AnimSchool. Hello Brian! Can you start telling us a bit about yourself and what animation and 3D experience you had before AnimSchool? 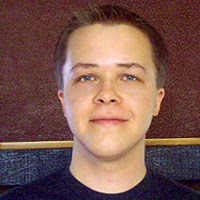 I sure can, haha!

After High School, my goal at the time was to enroll into roughly eight more years to become a Biochemist.
I can already see some of the baffled expressions from readers wondering why, since animation is such a neat field to be in.
Bio chem sounded cool... At the time... But after talking to some people in that line of work, it didn't feel like my cup O' Tea.
Like dealing with flesh eating viruses and other nasty bits, any one hungry?!

The next best thing for me was software engineering. It was simple enough, write this, publish that, stumble upon infinite loops by accident that require a hard computer reset... Good times.
It was that very job which led me into the world of animation, on a lunch break perusing the internet.

I've always had a fascination with visual effects and stop motion, and would periodically read “How they did it” articles around the inter-tubes.
A blurb comparison between 3D software’s caught my eye, as it mentioned a completely free authoring environment for animators.
It wasn't long before I could fiddle with joints, tangent handles, and key frames with zero knowledge of what I was doing, but I loved it!
Rendering out something bobbing about randomly across the screen was a rewarding experience!
"The Illusion of Life", and a few other animation books promptly replaced all my office programming literature.

Soon after, I stumbled upon a nice fellow by the name of Keith Lango, who at the time, was selling animation training videos for around $18.00 a pop... I bought most of them, hahaha!
(AnimSchool did not exist at this time).

What inspired you to get started in animation?

Animation is a great medium to inspire the imagination! With a few sheets of paper we can transport an audience into a world of talking animals, super heroes, suspense, magic, drama... You get the picture.

I could have a hand in creating those worlds, and to me that was the clincher; knowing whatever I worked on could entertain people of all ages.
My nephew (5 years) was a big helper in that too, a simple bouncing ball threw him into fits of laughter, which kept me going, and keeps me going to this day.

Old works he liked were:

What are your favorite animators? What do you love about their work?

Glen Keane from Disney, and whomever animated Wallace and Gromit back in the day. They did so much with so little, and made it look easy!
If you look up Glen Keane you can find video clips of his working process, and it's fascinating!
There is one particular clip in which you can watch him animate straight ahead a swimming sequence of Ariel from the Little Mermaid.
His drawings are nice and rough, he stresses the importance of “give” and “power”, and while he flips through the drawings, your mind is blown by how each pose ties in to the next one.

For those who are curious:

And Wallace and Gromit is just a work of art, “Cheese Gromit, Cheese!”

Which of the assignments you completed at AnimSchool you found to be the most challenging? Why?

It has taken me almost three years to mold my process into something that can be used to produce decent work. Before that, all my assignments felt like lessons in trial and error, but full of moments of growth and understanding.

The optional rigging course posed it's own series of challenges, but was well worth all of the effort involved. I can tell you that knowing what constraints would work for different situations and how to apply them is a real benefit! Especially if you are a one person operation on a small scene; It doesn't hurt to be a little multifaceted in this industry either.

The running jump was difficult due to it being my first ever attempt at moving a character forward through a scene. I also had issues with turning a character around, which was done twice in my particular shot.
Being said, I might of bitten off more than I could handle at that particular stage, but if I hadn't, I would of not learned as much.

It is easy in animation to take the simple path, especially when learning, but if you don't push yourself, how else are you expected to develop your skills?

Can you describe the process of your Class 6 Facial Performance piece and share some of the feedback you had with your instructor?

When the facial performance class started I was still developing my working methods. Some of what I did in prior classes didn't help me in this particular assignment.
Speaking alone, brought together more technical issues than I was anticipating.

My process thus far is:

PREP WORK:
Listen to audio, if any, over and over and over until I can recite it exactly. Even to the point of mimicking the cadence, tone and overall feeling of the performance.

Thumbnail out ideas, or emotive poses that help me delve into how a particular character will act on screen. And how I want the audience to feel towards that character.

I will also record myself acting any ideas out that I have drawn on paper to see if they would be even feasible. But not copying it, just to preview how things might look.
I mostly use reference as a memory dump, the same goes for thumbnails, they are both tools, but nothing that should be taken literally. Otherwise we would be asked to rotoscope, and that's not fun.

When I am able to solidify an idea, I'll draw poses out in sequence, save each image as a PNG, then import them into Maya as image planes.
To animate them, I will turn on and off their visibility throughout the time line, so I can playblast a video to watch in Quicktime (I'm working on a script to automate this process).

BLOCKING:
In passes, starting at almost no detail, I will straight ahead my scene. Usually only two or three poses in the beginning.
Then with each pass, adding more poses straight ahead, refining earlier ones until things are on 4's, or have enough detail so splining isn't a headache.
It is crucial to flip through your animations forwards and reverse to get a good feel for movement hitches.

LINEAR FACIAL:
I will then switch my splines and working method to linear and begin working out my facial poses for speaking, if the animation calls for it.
I also look for errors in movement like wobbles, pops, and gimbal lock.. which will get worse when in full spline.
Errors are easy to spot given Maya is not adding in eases, or overshoots into my work.

SPLINE:
Switch everything to spline and playblast. Take notes for the overall scene; open Maya again but shrink the timeline to only render in portions, as I only want to focus on little bits at a time to avoid fatigue.

I will push things even further as spline curves put motion on 1's, which tend to make shots appear not as punchy as their stepped counterparts.

I try to put enough detail into my blocking so splining is a quick process; offsetting keys causes nothing but problems, so I usually avoid doing so.

DONE:
Nothing else to do but move on to another shot.

My feedback for this piece was on appropriate acting choices and on how to give moments of pause, so the audience can understand what is going on.
We also focused very strongly on appeal, which can include head angle, brows, pucker, gestures, camera distance, scene composition... Etc etc.

I had difficulty with my acting choices, as my reference was a bit over the top... I have yet to get over being on front of a camera, even if it is my own dinky Kodak, hahaha!
It took a lot of feedback to arrive at the above animation, and my instructor was not lacking one bit in ideas, suggestions or wisdom.

If it wasn't for that, who knows what this would of turned out to be.

AnimSchool also provides students an opportunity to speak with other instructors outside of class in what are called “General Reviews.” If you get the opportunity to have multiple eyes on a project, go for it, I certainly did!

Heck, post your work in outside school forums like Creative Crash or 11second Club, for an extra punch!

How is your experience at AnimSchool being so far?

I am thankful for the existence of AnimSchool and for its founders goal of providing this fine resource to those that want it. If it wasn't for their pricing programs I would of not been able to afford schooling.

AnimSchool cares quite a bit, and will work with you to find a payment option that fits, which by no means is a tag line... They really do! Every student here is considerate and kind as well!

I remember during my first few classes, a few of us would meet afterwords in Google+ to discuss our work and give each other feedback. Not without network connections drops and software bugs, but it was fun!

I am sad to leave here after class seven, but it's been quite a ride, and I won't forget it.
A bittersweet ending, but an exciting beginning.

Do you have any advices for students just starting out?

Push yourself with each assignment, and avoid the easy route.
Create the best work you can, and If you receive a low score, try again, don't give up.
Take suggestions outside of class with a grain of salt, but focus on ones that seem to be consistent.

If you are afraid to act in front of a camera, get a friend to do it!

I can't stress enough the importance of “rig testing”. With every new rig you are handed, set aside some time to pose, break, morph and comprehend the limitations and strengths of that rig. If you don't, you can have the best idea imaginable, begin working in 3D, only to find your rig is not capable of that “cool move” you wanted.

Learn to script, or at least have a basic understanding of both melscript and Python; whatever language your current platform can understand.
Just look at the popularity of autoTangent or Tween Machine, I can't believe they aren't a part of Maya yet... Well Maya 2013+ has auto curves, but it's just not the same.
Posted by Guz at 1:00 PM