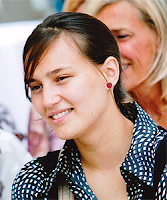 We'd like to present you Laura Loossens, student of the 3D Animation Program at AnimSchool. Hi Laura! Can you start by telling us a bit about yourself, like your background and experience before AnimSchool?

Before I even thought of being an animator, I studied economics and languages in high school. After that I started psychology at the University of Ghent but I didn’t felt passionate about it. I did however love to draw but I never thought to be doing something creative in the future. Until the moment one of my friends suggested a brand new educational program, Digital Arts and Entertainment (DAE), that only recently emerged in Belgium which was specialized in all the things I admired: 3D, 2D, animation and video games.
During my 3 years at Digital Arts and Entertainment I learned a bit of everything, even programming which I failed for in my first year. I had some trouble in the beginning with all the courses, simply because everything was new to me.
Nevertheless I never worked this hard for something, just because I loved to do it! All the hard work paid off and at the end of my studies I won the prize of best 3D artist and together with my awesome teammates, we won the prize of best game!
After my studies I started working in a small visual effects studio where I did various jobs but my main function was modeler and shader. I learned a lot and got better each day but there was no growing possibility as an animator in the studio, so I made a crucial decision to start the animation course at AnimSchool!

What made you want to be a character animator?

My first source of inspiration came from the many Disney movies I saw when I was a kid and later on movies like ‘Ratatouille’,’ Cloudy with a chance of meatballs’ and ‘Horton hears a who’ were a big inspirations for leading me in the direction of becoming a character animator.
My second source of inspiration came during my last year at DAE when we got the chance to create our own short and were completely free doing so. I came up with a little story named ‘Little Rico’ and made the clip in a short amount of time. During the development, I probably looked like a zombie but I also had the most fun bringing my story and characters to life. This was a decisive moment, I knew I was going to become an animator.

Do you have any favorite artists that inspire you?

There are many different people that inspire me since the internet provides us a variety of animation clips, and I get inspired by many of them. I've seen some of them over and over, just to get a better understanding on their appeal.
Also, I will always have a passion for 2D animation. It is a medium that appealed to me ever since I was young. When I look at the work made by the artists at Bird Box Studio I get really inspired by the perfect timing and simplicity of their clips.

Your Facial Performance shot is a great piece. Can you tell a bit more about your process from start to finish?

The sound I chose was one that had been stuck in my mind for quite some time. The audio had so much personality of a sassy woman demanding a new drink in her own way. With that image in mind I started shooting different kinds of reference videos and I seemed to like acting like a sassy lady.

Laura's video reference for her facial
performance assignment
I imagined her sitting at her desk or at a bar, or not sitting down at all, just to get different angles that could look appealing. I learned this by watching a reference shot of Garrett Shikuma that showed us his variety of reference takes, just to come up with appealing poses and ideas.
After setting up my reference I start to block out my shot. I only look for the key poses that could really sell the shot. My reference served as a solid base and helped to find the key poses and timing for my animation.

After that very first pass of blocking I go over the same poses and look if the timing is working and if I can push some poses even further.
Spline is the next step where I spend time adjusting my curves. Normally I would take a long time for blocking however my mentor at the time, Melvin Tan, had a different approach. He would block out the scene fast and start with spline, but the method I used was the opposite.

I decided to follow Melvin’s suggestion, since it is always interesting to try out different ways of working and understand what the benefits are. In the beginning I struggled a bit but soon I discovered the benefits of working this way. I could spend more time on the details and characteristics traits of the character.

What was the most challenging assignment you had to deal with so far? How did you manage to overcome it's obstacles?

I think each assignment has its challenges. Every time I overcome one challenge there is another waiting in line. But these challenges are what makes me move forward.

In my case there was the assignment for the Body Acting class. We had the possibility to create our own story without sound. I came up with a funny story of a scientist that was inventing an invisibility potion and was searching for the last clue. When he finally found it and tested it, he bumped over his potion on the chalkboard with his formula written on it.

While making this clip, I had difficulties getting the timing and poses correct. My instructor at the time, Tony Bonilla, was hard and honest. He kept pushing me in the good direction and I never gave up, even when I had to redo all my poses to really push them.

Even the latest version is not completely finished, but I had overcome so many challenges with that assignment that the following terms became a bit easier to complete, since I was better prepared for what was coming.

Make the best of all the time you get with your instructors! Anthea Kerou taught me how to create a good base for animation, Tony Bonilla and Garrett Shikuma the importance of each stage of animation and Melvin Tan how to give your character more personality.

Listen to the feedback you get not only from your instructors but also from you fellow students. Always be critical of your work. Keep trying to get better and never think you are doing bad, since each step you take will bring you closer to your goal!

We thank Laura for her time and be sure to check out her Blog and her LinkedIn profile!