We would like to welcome Mark Tan, one of our latest graduates from the 3D Animation Program. 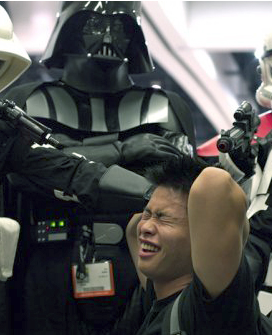 Tell us a little about yourself, what's your background? How did you get into animation?

Like many others, I grew up drawing what I saw.  I didn't just like drawing figures, but telling a story.  My very first creations I made as a kid (around 5 years old) had a scene drawn along with a story written.
Despite these early beginnings, animation never dawned on me as a profession until a counselor at college brought it up.  Once I started, animation totally took over my focus.  We experimented with 2D, paper cut out animation, as well as claymation my freshman year.  In my second year of college, we eventually were taught Maya and all the technical facets of the program.

Along with learning animation, my interest in filmmaking blossomed during college as well.  I watched thousands of films (live action and animated), read screenwriting books, and started to make shorts/music videos.
I chose animation as a profession because I believe at the core of every well told story is a strong believable performance.  Animation gives us the ability to explore the personality of any character without the hinderance of our outward appearance.

The best part of online education is having access to some of the most skilled in the industry today without having to travel at all.  I told myself before enrolling that if these guys can't help me improve drastically, then I'm not trying hard enough!

I really enjoy shooting video reference prior to going on the computer.  There is something special about actually acting out your scene.  The possibilities seem endless.  There are also quirks and small details captured on video that can be helpful as well.  It is much easier to approach a shot when you have the majority of your movements and expressions locked down in a video edit.

I can't really say I favor any type of animation, but I can mention a few scenes/shorts that inspire me.

1.  Seeing the work of Min Hong, Alaa Abu Hanish, James Kim, and many others before and during Animschool fueled my motivation to improve.

2. I will always remember the shot in Finding Nemo where Dory tells Marlin that when she looks at him, she's home.  It's amazing how much is achieved with a character that's basically a floating face with fins.

3. Another scene I always enjoy watching is Presto.  The staccatto movements and upright poses of the magician purely give way to his whole personality in one shot.  There is a lot of fun animation in the whole short, but the held poses are what seem to be the funniest to me.


4. I was really into the early works of Nick Park, Bill Plympton and Don Hertzfeldt when I started out college years ago.  I found shorts like "Creature Comforts", "How to Kiss" and "Rejected Cartoons" to be very entertaining.

You've done some great shots along the way at Animschool and some of them have been featured at the Student Showcase. Which one did you like the most? How was your workflow for this shot?

I think my most successful shot came out of class 6 with Melvin Tan.  He was the most picky and pushed me the hardest on my shot from start to finish.  I chose a very challenging audio clip after hours of searching, and that was just the beginning of the journey.

I approached the video reference like I always did, but I remember Melvin had very clear and distinct decisions on what didn't work for him.  The main notes of the first reference was to make the performance more confrontational by breaking less eye contact in the beginning of the scene.  After about 50 total takes, I finally reached something close to begin animating with.

In what ways do you think Animschool has helped you to be a better animator?

Animschool's animation program structure helped me sharpen my skills from the ground up.

In Animating Characters, two major things I picked up was the idea of lead/follow, as well as how to balance the weight of your character in space.

In Body Acting, texture was a big focus on how to break up the flow of the dancer in the subway to add more interest.  Also, the opening up of the face for eye direction, avoiding wall eyed positions of the irises, proper spacing/smear frames, and the importance of breaking down video reference better (and enhancing the appeal in your work).

The last three classes involved more complex characters and lip sync.  I learned a lot more about polish and all the little details that really make your shot shine.  The most important thing throughout this back end of the program was that I learned what it takes to finish a good shot.

Any advice or tip that you remember from an instructor that you've had along the way?

Lead and follow has helped me a lot.  Choosing what to lead the action to another pose always helps to break up the animation and add a more natural feel.  Though I have gone too far sometimes, this concept is always on my mind.

Are you currently working in the animation industry? Tell us about it.

I am currently trying to get work in feature films.  My last gig was animating Ninja Turtles for promotional and commercial spots for the movie.  Some of it was recently used in a music video for a song from the movie's soundtrack.

Right now I'm hoping to be making a living working in the movie industry.  I don't know what 5 years in the future holds for me, but I'm going to put my effort in one day at a time and see where that takes me.

I'm into weightlifting, play basketball regularly, and occasionally play tennis.  When not sitting at a computer, I try to stay as active as possible.

Save nothing for the swim back.

What are your plans now that you've graduated from Animschool?

As I stated earlier, I want to gain experience in the animated film industry.  I have worked on video game cinematics, video game animation, and television.  I have recently started the job hunt.  Wish me luck!

Mark, thank you very much for this interview and all the best for your future outside Animschool!

Posted by Martin Schusterman at 6:32 AM