Since its release in April last year, Here’s the Plan has received acclaim for its realistic portrayal of the hardships of relationships, as well as its bright and pleasing art style. This 18-minute “short” was animated by a hard-working team of 5 animators, many of whom are or were students here at AnimSchool. I had the great pleasure of interviewing them on their work on Here’s the Plan, and I’m excited to share what they had to say. Last, but not least, we have an interview with Francisco Anabalón, who is a current student at AnimSchool.


Please tell us a little bit about yourself.
Hi! I´m Francisco Anabalón, I´m a Digital Animator currently finishing the Animation Program at AnimSchool, from Santiago de Chile. Before enrolling in AnimSchool, I studied drawing at an art program of a local University and then Digital Animation, after that I worked 2 years as a freelance character animator and then I decided to study here at AnimSchool. Besides animation, I really like life drawing ( https://www.facebook.com/FranciscoAnabalonArt/) and play guitar!

How did you find out about “Here’s the Plan”, and what drove you to work on it?
Fernanda Frick and I were classmates during the first year of my studies in Digital Animation. She left the school, but we were still meeting at animation events. When she won funding for her film on the Chile´s National Council of Culture and Arts, I was working on commercials and tv series, but I wanted to work on something more challenging in artistic terms. I met her at an animation festival and likely she was looking for character animators at the time, so she agreed to work with me when I asked her.

What is your favorite aspect of the film?
I think the art direction and all the CG aesthetic achieved is really cool and original. I also like the camera work, the cinematography. In terms of animation, there are really good shots, I wish we had more time to do stronger character animation on the whole movie - I think that was the most difficult part to achieve with the funds and the time Fernanda had.

What were some of the hardships of working on a short film?
The most difficult part for me was the time we had to finish the shots. I really wanted to do the best animation I could, so at the beginning I did it as well as I could even knowing that, by taking longer, it meant I would have a lower wage at the end of the month (the Council of Culture and Arts pays by "animated second” - that isn’t much) but in the end, taking too long wasn´t possible because of the deadline. It was stressful for me on that aspect, probably because I hadn’t had a similar experience before.

Were there things you learned during your classes at AnimSchool that you applied to your animation?

I enrolled in AnimSchool after finishing “Here’s the Plan”, but I had two mates there that had done the Animation Program in AnimSchool when we were on the production (Maikoe Alaniz and María José Venegas). I was really impressed by their work and they recommend me the school, so I decided to study here. I wish I could take my shots back and do it them again with all that I´ve learned here. Many things that I thought I knew I realized I didn’t understand well until I saw the way my instructors approached them - for example, understanding how to depict proper weight to a bouncing ball through the highs and lows, or acting tips like avoiding generic breakdowns in your animation, body mechanics for something I didn't have much practice with, a deeper thought of the subtext of my acting choices, etc. I also think I have a better workflow now; this isn´t a rule, but an instructor taught us how to start with a pass with keys on all controls and then to offset them in groups when you pass to spline, and that helped me a lot to keep control on the movements until the polish. I think all these things would’ve helped me when I was animating on Here’s the Plan.


I´ve had a really good experience studying at AnimSchool, we have all these great industry pro instructors who critique your work for the whole course, and you learn all the principles, tips and workflow from them on the lectures. Also, the student community is very friendly and supporting, following the progress of your classmates it´s super motivating! 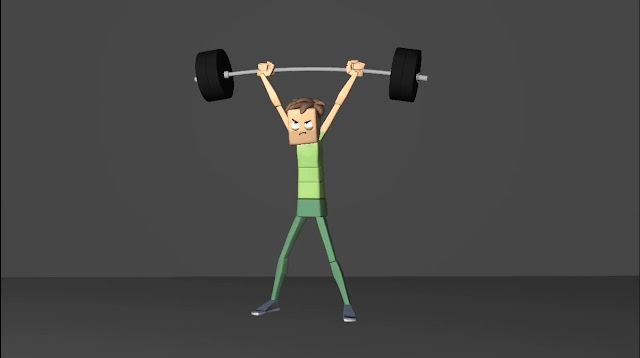 What is a shot you worked on that you’re particularly proud of? What was effective about it?
The shots that are on my demo reel are the ones I like the most ( https://vimeo.com/61929026 ) the style that Fernanda wanted was really subtle (not much stretch and squash, overlap...) but I think on their simplicity they communicate well the intentions of the characters.

Tell us about your workflow for animating a new shot. (Vid ref or drawings, how much goes into your blocking pass, whether you start in spline right away, use of tools/plug-ins, how you polish, how you implement director feedback)
Fernanda did this video with a shot of mine that shows my workflow: ( https://vimeo.com/254337202 ) I also used video reference on this and on most of the most important shots. I started working in stepped until I finished the breakdowns, but then I realized that working directly on spline was quicker, so I ended up doing just the main poses in stepped and then passed to spline right away. One important thing on my workflow was to be careful of keying the important poses and have everything in order before showing it, because Fernanda wasn´t approving everything at the first try (this may seem obvious for people working on big productions, but the commercials and tv series that I worked on tended to had few changes). Fernanda and Maikoe taught me how to used “Tween Machine” and “Arc Tracker”, I showed my animations and asked my doubts to both of them while I worked because they knew a lot more than me, they were really generous with their feedback and that was really useful to improve my workflow and the animation.

What advice do you have for students/grads looking to work on short films or freelance projects?
I think it is really good to do these kinds of projects to improve your portfolio and gain experience, I learnt a lot and met awesome people. It was also really cool seeing the project go so well. If you have the chance, it could be a really enriching experience! I believe is very important to go to festivals or animation events because they are great opportunities to network in person. Deciding to work with someone has a lot to do with knowing him or hearing of him- seeing an email with a good demo reel isn’t a guarantee that you are someone that can be trusted, and  people consider people that are present for them to recommend or hire. Besides, it’s really fun! I love those events, I go to all I can.

Lastly, you said that you worked on TV shows and commercials before working on Here's the Plan. What are some differences between working for TV and working for a short film? And, what were the pros and cons of both for you?
I think tv series look for a medium quality animation that you can create as fast as you can- there is no time to do many explorations. It is good for practicing animation principles, and generally are large projects so it is more stable than commercials. For me the cons is that you tend to win more if you are faster, not necessarily if you achieve better quality.
Commercials are generally better paid than TV series, but they are unstable - many animators learn other things to stay on one place (like rigging, modeling..), Also, I think it is difficult to learn acting doing them because you are not telling a story in a strict sense.

In my experience with Here’s the Plan, I had the chance to explore acting more in depth than in my previous jobs. It was also very different to work for the vision of Fernanda. Her short film was so important to her and she had an artistic vision, she wanted to tell something with it, and sometimes I had to re-do something because “that wasn’t the kind of relationship the couple had,” for example. That is really cool and it’s the kind of artistic task that I want to work on. The cons in this case was that there were no much money to do it, I couldn´t work permanently on a job like that. I think working on bigger projects with that standard would be really cool, I hope I´ll be able to do that with what I´ve been learning with AnimSchool.

Thank you so much, Francisco!

You can check out more of Francisco’s work here.