We'd like to introduce Animschool student Xin Zhao! You may have already heard of her, because she has been previously interviewed for her outstanding work with a Malcolm mod, and has become a reoccurring name in our character Animation Showcase. We decided to catch up with her to ask her a few questions and see how she's been doing.

So to start us off, tell us about yourself! What is your background? Where are you from and what brought you to the animation industry?

I grew up in a family of photographers in Beijing, so I was introduced to arts pretty early. I always loved to draw and to watch an insane amount on cartoon on TV like every kids. I also had hundreds of Mickey Mouse Magazines in my room. So my family sent me to professional fine art school on weekends since I was in primary school and then I became a full-time student there during high school. With all my skills of drawing and design, I was going to choose the path of being a Graphic or Fashion designer. But then I attended a lecture given by a lecturer from my university, he gave me the idea of being an animator! It just hit my head! Just like that, I left home to do my animation degree in UK. My time at university allowed me to learn about 3D from zero. Right after me and my partner Florent finished our final year animation short called The Answer, which has been chosen as ''Staff Picks'' on Vimeo, we landed ourselves jobs as animators at Ubisoft in 2013. I met a lot of great people at Ubisoft and it encouraged me to enroll in Animschool to continue my animation study and to become a better animator.

Sounds like a great sucess story of how a strong portfolio can get you work. Tell us what you do at Ubisoft

At Ubisoft. I'm currently working on an upcoming open world third-person shooter games named Tom Clancy's The Division. My job is to create realistic In-game animations for the player character's navigation system, both keyframe and motion-capture, which requires a huge amount of animation cycles and transitions to bring the Division agents to life. At the very beginning of the project, we had to prototype these animation systems and work closely with the game designers. And then we create the animations needed and implement them in the game engine. The challenge is both artistic and technical but it is always satisfying to see your system work in game.


Before that, I had chances to work on other Ubisoft games, polishing facial animations on another open world game called Watch Dogs, and some pedestrian animations for a open world racing game called The Crew.

It sounds like you have a good amount of professional experience, may I ask why you decided to join animschool even though you already have your foot in the door?

I do enjoy it if I can get home from work and just relax, but sometimes it makes me feel like I'm a lazy person. So after a few month since I started to work I decided to push myself an extra mile and join AnimSchool. Efficiently it made me feel better about myself and more importantly, It will help me build up a better portfolio and gain myself more animation skills by learning from industry experts. In a couple of years, I see myself working on either animated features or VFX films depends on what opportunities comes up and the portfolio that I will get from my AnimSchool classes will definitely help me to achieve it. And at this early stage of my career, I have all the time I need to learn more things. So I started with Class 1 even if I already had some animation skills, just to get myself a really solid foundation and make sure I really nail down all the basics. Now I'm in Class 6 already, I feel like I have learn so much more about animation at AnimSchool and I have met other animation students here with the same goal which is also a great thing and it is really motivating.

You have a great amount of work in our student showcase, can you pick your favorite shot and tell us about it?

Yeah it was such a honor to have my work included in the student showcase :) I really enjoyed animating every shots and the one that I enjoyed the most was my Class 4 Body Acting shot. I have been animating a lot of realistic shots so I listened to my Class 5 tutor Ben's advice and tried to do something really cartoony this time, also to add some variety in my portfolio. The process was fun. It was really hard to shoot the reference because I had to move so much for hours and hours, jumping, running from a side of the room to another and fake flying on a sofa, although I didn't end up using my video reference as much as I thought since it's all so cartoony hahaha. When I animate, I tried to experiment the cartoony style as much as I can, playing with shapes, smear frames and multiples, it was really a great and fun process. A big thanks to all of my tutors too, they are just great!

It is difficult to pick a lesson out of everything I learn during my time at Animschool. But recently, during class 5 (character performance) my instructor helped me to understand when to move from blocking to spline. It is easy to learn the workflow steps but it can be quite challenging to know when it is not helping anymore to stay in blocking on some special shots and when to move on.

Are there any animators or specific animation shots that inspire you?

I often watch frame by frame through animated features, shorts, or animation tests to learn from the others. One of my favorite film to scroll through is Hotel Transylvania, they get away with so many crazy shapes and transitions and it looks awesome, and each single poses are fun to watch. One of my favorite shots from that film is when Dracula is telling Jonathan to move his hands away from his eyeballs. I just loved how Dracula was posed and the little movements on this fingers: 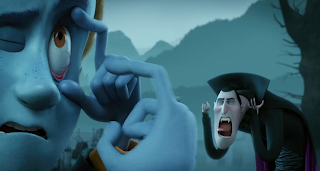 Tell us about your workflow!
There are different ways to approach a shot. But normally I try to work things out in my brain at first. It includes thinking about what is the character's situation and the emotion of the scene. Once I know my story and the style I want to go for, I like to watch some movies which fit the style to get in the mood and gather ideas for my acting. Then I usually move on to shooting references. I record a few hours and end up with 2 or 3 takes that I really like. When I create my scene and before animating, I like to waste a few hours on creating a nice environment haha. Finally, I create my key story telling poses and then I add more and more breakdowns and overshoot etc etc until my keys are on 2s. I spline and polish after that. Of course, during the whole process I receive a lot of feedback from my class instructors, the general review and sometimes my colleagues at work.

Thank you taking the time to speak with us, Xin!


Posted by DanielArata at 1:05 PM No comments:


In AnimSchool's Introduction to 3D Animation, our teacher Anthea Kerou shows how to properly animate a Boucing ball.

As you may know, Bouncing ball is the first and most important animation that every aspiring animator should do, many times over. Mastering this exercise means that you began understanding Timing, Spacing as well as Arcs.


This is clip from AnimSchool's Introduction to 3D Animation. To view more great class clips, visit and join AnimSchool: http://www.animschool.com