First off- big congrats Tim, on winning the March competition of the 11 Second Club! What was your immediate reaction, and what was running through your mind when you heard the news? 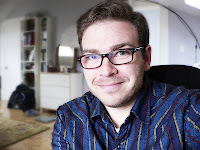 Thank you very much for the congratulations! On the day the results were released, I was totally in shock when I went to the 11 Second Club site and saw my animation on the front page. I had participated in the voting process and so I knew I was up against a lot of tough competition. There were many other great entries last month and I was really hoping just to finish in the top 11. Winning the competition and all the resulting positive feedback I have received has definitely been a big morale booster for me.

Can you tell us a little bit about your background and how you got into animation?

Animation has long been a passion of mine. Like many others, growing up I was glued to the television watching Disney films, Looney Tunes and Saturday morning cartoons. I was introduced to theater and acting at a young age. My dad is an actor whom participates extensively in local community theater and independent film. He used to take me along to his rehearsals and performances on weekends. I loved watching my dad and the other actors transform into different people and assume personalities contrary to who they were in “real life.” I actually didn’t decide that I wanted to be an animator until my senior year of high school. I had some great teachers that got me interested in science and engineering, so I was considering studying to become an engineer. That soon changed when I started taking art classes and my art teacher nurtured my creative side and got me really passionate about creating art. When I started researching colleges and career choices, I found schools that were offering degrees in computer animation. Until then, I had never realized that you could make a career out of doing animation, but it turned out to be a perfect fit for me because it married all the things I was interested in: art, performance, and technology. From that point on, I have devoted myself to animation and constantly push myself to improve my craft. I have had quite a bit more animation education/training that most people have, but animation has not always come naturally to me, and I have had to work really hard to get to the level I'm at now. I'm still pushing my self to improve, but that’s the beauty of animation; you can never stop learning and you can always continue to grow as an animator. My ultimate goal is to work as an animator on a feature film. I haven’t reached that goal yet, but I am determined not to give up. Hopefully, one day, that dream will come true.

What influenced your decision to use AnimSchool's Malcolm rig for your entry, and did the rig deliver to your expectations?

First of all, I would like to thank AnimSchool for making such an awesome rig available for public use. I really love Malcolm’s design and his overall flexibility. He can be pushed and pulled further than any other rig that I have used. His facial setup is awesome; it's really easy to get appealing shapes and expressions. Because of the nature of the competition’s dialogue, I didn’t get to utilize the rig to its full potential, but for my shot, the IK elbow pinning and the IK/FK switching came in very handy.


Were there any challenges or difficulties you faced when using the Malcolm rig, and if so, how did you overcome them? 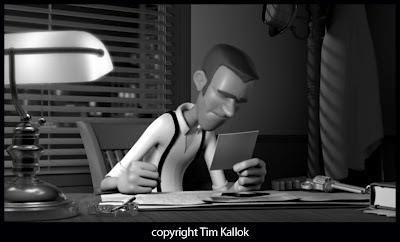 Upon first opening the rig, it can be a bit daunting, because there are so many controls! Once I learned that you could hide controls in the picker by using the basic, most, and all buttons, that made it much easier for me to approach the rig. That feature also helped streamline my workflow by letting me concentrate only on the controls that I need at the time. So, in blocking, I only used the basic controls. Once I moved onto the anim pass and polish, I could turn on the other controls to really refine the poses.

The technical hurdle I faced with Malcolm was in the modification process, trying to figure out the best way to add on his collared shirt and suspenders and have them be tucked in his pants. In order to do that, the first thing I did was use the shirt controls near his waist to “tuck” his shirt in to his pants. I also used the “Narrow Pants Tp” attribute on the “ctlHips1” control to widen the waist of his pants. I then modeled his shirt and suspenders as separate polygon objects and used a wrap deformer to have them follow the rig.

Other than that, the only other challenges I faced were really just standard animation issues like making sure his hands and fingers were not going through the table or cleanly switching his arms from IK to FK. Up until Sam gets up, both arms are IK. Once he stands up they switch over to FK. The IK/FK switcher in the picker, made that process much easier.

You mentioned in the brief description, you couldn't achieve the level of polish you were hoping for. What were some of the extra things you had to leave out to meet the deadline? 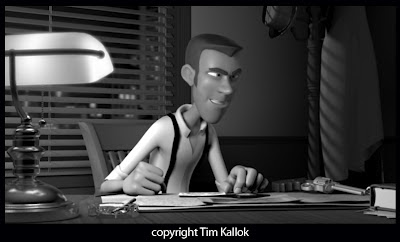 I know I’m not alone in saying that it's really hard to stop working on an animation and know when to say it’s “finished.” If I would have had more time to work on it before the deadline, I would have spent some more time polishing the face, making sure the corners of the mouth had clean arcs, adding in some more eye movement, and refining the brows. I actually made a big change the day before the deadline. Originally, I had Sam put both arms on the chair as he gets up, then grab the gun as he exits. I showed my progress to one of my friends and he suggested that I have Sam go for the gun as he stood up. I made the change and it really helped, because it made him feel more determined and focused on the task at hand. Because that change came up so late, I didn’t have the time to get the spacing in the hand right or the fingers working well as he grabs the gun.

You were able to gets some really appealing mouth shapes, did you experiment with that before going into lip sync?

I didn’t really experiment with any mouth shapes prior to animating the lip sync. During the planning phase, I broke down the dialogue in to phonemes, so I knew, more or less, what shapes I needed to hit. I have a mirror on my desk, which I use quite extensively while animating. For the first pass of lip sync, I start with the opening and closing of the jaw. Once I have that in, I move on to the corners of the mouth and how they move in and out. From there, I concentrate on the secondary mouth controls, to fine tune the shapes, add in pucker and compression, and break up the symmetry as much as possible.

In the beginning of your animation you pulled off your character, Sam, having limited movement. What did you do to keep the pose alive during this time, and what were some of the extra things you did to sell your idea?

The beginning section was definitely a big challenge. This was my first attempt at doing subtle animation and I found that there's a real fine line between the character feeling dead and moving too much. One of the things that I work out during planning, is figuring out the least number of poses I need in order to tell the story. While Sam is talking, I felt that I only needed one pose and that I could act within the pose to hit the accents in the dialogue. Even though the accents are not too big, I incorporated the whole upper body into each one. I offset a lot of the movements so the parts of the action settled at different times. Moving holds were also very important throughout in order to keep him alive. I spent quite a bit of time tweaking splines in the graph editor, trying to find just the right amount of movement needed.

I could be really off base on this, but the present Sam, holding the photograph, looks a little bit more aged and withered then the character we see in the photograph. Apart from the body, did you modify the facial features to help sell that idea? 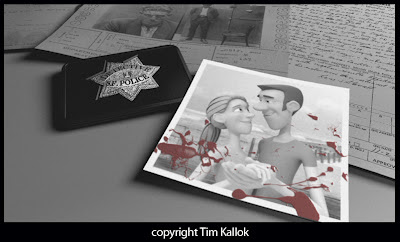 That’s a good catch. I did a few subtle things with the face to make him feel a bit more unkempt and distressed. One was to keep the mid brows pushed together so you could the crease/wrinkle between them. I also increased the “Naso Crease” slightly, so the wrinkle between the nose and corner of the mouth was a bit more prominent. The last thing I did was add a custom texture map to his face so he has a 5 o’clock shadow.

Lastly, what's going to be next for you? What's in the pipeline?

At the moment, I'm finishing up my reel. I have some older unfinished projects that I have been revisiting and trying to get up to par with my newer work. I also have a few ideas for a new personal piece that is in the works.

To see more of Tim's work visit his website: http://timkallok.com/