AnimSchool would like to introduce Dustin Han, an AnimSchool student in our Character Program focusing on rigging. Dustin, can you tell us a little about yourself and what 3D experience you had before entering AnimSchool?

I recently graduated from a 4 year college before coming to AnimSchool. I studied Computer Engineering with a minor in Studio Art. I did some Flash development work at a start-up social gaming company before deciding to pursue my interest in 3D. I actually had very little experience with anything 3D or CG related before entering AnimSchool. The only experience I had coming into AnimSchool was a single class I took at my university that covered the very basics of using Maya. However, because I was a student studying computer engineering and studio art, I did have a good foundation in both programming and fine arts which has been a tremendous help during my time learning to rig and model characters at AnimSchool.


Are there any artists that inspire you?

I don't necessarily have a list of artists in my mind that I can just start talking about especially because there are so many inspirational artists out there that it would make it difficult for me to pick a few. In general, the artists who inspire me most are those who love doing what they do and clearly show this through their work and dedication. This pretty much goes for anyone I come across, artist or not. Also, artists who started from a dream and made it into a reality through hard work and perseverance are great inspirations to me as I hope to one day have similar success.

What did you find the most challenging about modeling your character?

It was definitely challenging to convert a 2D image into a 3D model especially when you only have one reference picture to look at. A lot of the character was left to my imagination such as what his back side might look like, but this challenging aspect provided a great learning experience and just made the modeling process more rewarding. Also, being my first full character model, it was definitely challenging just to get the model to look appealing and match the artwork. I found it difficult to get the sharp corners found in the character design into my 3D model especially when trying to keep the topology reasonably low. I went to one of the general reviews provided by AnimSchool near the end of the term which definitely helped and looking back I wish I could have attended more to improve my model. So future students, I definitely suggest you guys attend these review sessions as you can never have too many people critique your work.

We first blocked out our characters in pose with basic low poly primitive shapes such as cylinders, cubes, and spheres in order to have a reference later when putting it back into pose. From there, we moved the model into T-pose and began modeling it from there. This made it easier to get proportions right and to mirror over left and right sides. After finishing the model we used our blocked pose as reference to get it back into pose and apply final touches such as wrinkles on clothes and accessories such as my character's hammer and bags.

I really enjoyed the process we took into creating our models so I'm not sure I would change too much. Although, because we modeled with the intention of basically just creating a statue, for my next model I will probably pay more attention to modeling with the needs of rigging in mind beyond what was covered in class. This includes things such as providing enough topology for deformations and making sure the model is easily skinned since the model I made in the intermediate class is made up of several meshes in order to make it easier to pose the character. My model actually has no torso or legs under his clothing. As I continue to study rigging and creating more rigs, I believe I will start to understand more of what the needs are for future models I make.

How did you become interested in becoming a Rigger?

Initially, I did not realize rigging even existed when I first became interested in 3D and animated films. All I knew was I wanted to be a part of making the amazing films I was seeing in the theater.  It was only natural for me to want to become an animator at first since the animations were what I was seeing at the top layer of the films I was watching. I did not realize there was so much more happening underneath. Because of this mindset, I often pushed aside my dreams of becoming an animator due to my technical degree in computer engineering and not wanting to put it to waste. I figured I could maybe land a job as a software engineer at a video game or film company.

However, as time went on, I began to realize I could not simply ignore my interest in the creative and artistic aspects of things because it was just a big part of who I was. With that, I began to research and found that there were positions in game and film companies called Technical Directors/Aritsts where both (although varying between positions) technical and artistic skills are used. It kind of just opened my eyes to the industry and helped me to continue pursuing my dream. I decided to focus on learning to rig because I really enjoy characters in films and would love to work directly with them. Eventually though, I would love to delve into other aspects of the pipeline.

Now that you've had a couple of rigging classes at AnimSchool, do you view 3D films differently? What do you notice now, that you didn't before?

The classes have definitely opened my eyes to the amount of work it takes to create a feature level rig. There are just a ton of things to take into consideration when designing a rig for animation. Now when I watch animated films I'm even more amazed by what I see as I now have a better appreciation of how much effort goes into developing these rigs. Coming into a rigging class with no prior knowledge, I naively thought it was just placing bones into a character to allow them to move and be animated, but there are just several more layers of complexity on top of that including creating clean deformations, understanding relationships between the different parts of the rig, and taking advantage of these relationships to provide a flexible and intuitive rig for animators to use with ease.

Looking back at past films, what character would you have loved to model or rig? Why does this character interest you?

I am a big fan of the Toy Story films so I would have loved to rig Woody or Buzz. It's amazing how much emotion and character can be brought out from a toy through animation. I can only imagine how challenging it was to rig a toy in order for it to come to life yet retain its toy-like qualities during the animation process.

How has your experience been at AnimSchool? Do you have a favorite process or tip that you've learned? 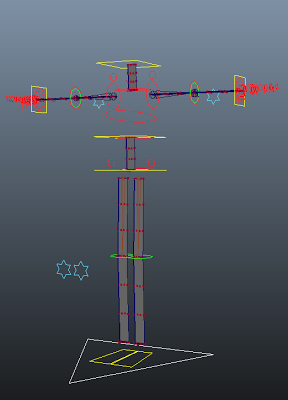 My experience at AnimSchool has been great. I have learned so much in the 4 terms I have been here. Just being taught by industry professionals who have worked on some of my favorite films is an amazing experience as you can be confident in knowing that what you are being taught is relevant to what companies want to see. The AnimSchool community is great and everyone is so supportive of one another. It's just a great feeling to learn with people sharing similar goals. I've become much more confident in general after producing work I never could have imagined before entering the program.

I have learned so many great things from AnimSchool that it's difficult to pick a favorite, but just because it's fresh off my mind from this past term of intermediate rigging, I really enjoyed my instructor's (Ignacio Barrios) approach to creating IK FK Switches (or any kind of space switch) with the use of Maya's blend color nodes where you simply blend the transformation values of the IK and FK joints together to provide the values for the driver joints as opposed to using constraints. It was just a great example of how there isn't just one way to solve a rigging problem.
Posted by AnimSchool at 9:15 PM