Former AnimSchool student Dylan Hoffman was incredibly fortunate last year to have had the oppurtunity to intern at not just one, but two of the industry's most well-known studios, Walt Disney Animation Studios and Lucasfilm. We were fortunate enough to catch up with Dylan and ask him about his experiences.

How did it feel the moment you got your first internship at Walt Disney Animation Studios?

I honestly couldn’t believe it. I just got a phone call out of the blue one day offering me the position. Obviously I was over-the-moon excited, and the feeling never left. Everyday I woke up I felt just as lucky and excited to be there as I did during that first phone call. I STILL feel incredibly lucky to have gotten the chance.


What was a typical day like for a Disney Intern?

I was on a team with 10 other interns, all from different schools and backgrounds. It was structured as a learning experience more than anything else, with different “classes” each day where we met with members of different departments to learn more about the whole 3D pipeline. Throughout the process we also worked together to make our own short film. I helped with modeling, rigging, and animation, so my “typical day” was filled mostly with working on the film in between class.


Was that very different from a typical day as an intern at Lucasfilm?

Very much so! While Disney was a structured internship program, with scheduled tours, trainings, and much more focus on us and our learning, Lucasfilm was, simply put, a job! Still an incredible opportunity, but from day 1 I was thrown into actual production on the Star Wars Rebels TV series, with fast-paced tv deadlines to hit and projects to finish. It was also on a much smaller scale, as I was the only intern on a team of 40 or so, as compared to the MUCH larger Disney. They were both incredible, and I learned very different things from each.


How do you think you have grown from your experiences at two of the biggest animation/vfx studios of all time? 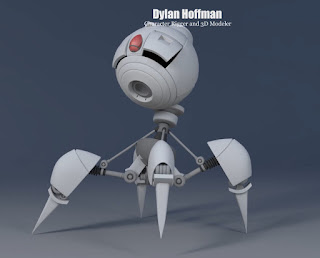 Wow. That’s a loaded question! One of the biggest things I learned from working at these places was how important it is to stay humble and teachable. Even though those studios are crammed from wall-to-wall with some of the best talent in the world, everyone I met felt as lucky and fortunate to be there as I did! They never stopped learning or working to keep that feeling of wonder alive. As a result of my experiences, I have a renewed desire to work harder, but want to make sure I’m always kind and teachable. We are all learning, and will hopefully never STOP learning. The moment you feel like you “know enough” and stop actively trying to progress, you’ll quickly fall behind!

Clearly you are a pro at getting huge internships by now, so do you have any tips or words of wisdom for the rest of us who want to apply?

Haha! I certainly wouldn’t call myself a pro! I feel incredibly fortunate to have had these opportunities, and I still feel like I’m no different than all the other incredible friends and classmates I work with everyday. So much of my opportunities just came down to fortuitous timing. I guess if I had to give any tips, I’d honestly say the most important thing to do is just be nice! We all know that our work has to be top-notch, but in such a competitive industry sometimes it’s easy to forget that just as important as what you know is WHO you know. I don’t mean that in a sneaky, “sweet-talking” sort of way. Quite the opposite. I just mean always being genuine and kind to people. I’ll always try and take time to help my classmates, not only because it’s the right thing to do, but I know someday we will probably be working together! The animation world is SUPER small, and when your name comes up during an application, you want someone in the room to be able to say, “Oh ya! I went to school with _______. They were always a great team-player.” I’ve talked to recruiters about this quite a bit, and they’ve said they’ll take ability to work well with people over just raw ability every time. So work hard, but BE NICE!

Thank you so much for chatting with us Dylan and best of luck in the future!

Come learn with us at animschool.com
Posted by Alyssa Fifer at 12:37 PM