The Los Angeles Times reports that this year the Academy Awards will have 5 nominees for best animated film of the year. It's often limited to three, however, this year there are more films in consideration--21 animated films--for the Oscar nomination.
There need to be over 16 films in consideration for the category to grow from three to 5 nominations. This is an indication of just how many animated films have been produced this year; this has only been done three times (2002, 2009, 2011) since the category was introduced in 2001. 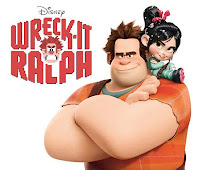 Disney's Wreck-It Ralph opening at estimated $49.1 million is sure to make the Academy list. This is Disney's best opening weekend ever, beating Tangled's 48.8 million. With Disney's fresh approach to story they are able to attract more than just the princess audience. In an article, USA Today reports that this could be a "game-changer" for the company!
USA Today Article: http://www.usatoday.com/story/life/movies/2012/10/31/wreckitralph-disney-movie-animation/1667373/

We at AnimSchool loved Wreck-It Ralph, and are very happy with its impressive start!
Posted by AnimSchool at 6:34 AM