We would like to welcome Blue Sky Story Artist, Mike Daley. Mike, can you tell us a little about your background and how you became a Story Artist for Blue Sky Studios?

Well, I started out drawing on everything as a kid. I filled up every last inch of every paper place mat, with every crayon, at every local eating establishment in Southern California. I was the fastest drawer in the west. Then I was that kid in high school that was put in charge of drawing out the art posters for group projects. I was also asked to design a lot of really bad tattoos. I was thought of as someone who was artistically talented. I'm sure that most artists and animators start out this way, or at least have a similar story...

In high school, I was direction-less in my career choices. I worked in a warehouse and was (on occasion) attending community college. In the art department, I took a few life drawing classes that exposed me to a professional art community and I got the idea that I could actually make a living drawing! WOW! It sounded a bit better than getting your fingers crushed in the warehouse. After that I was a bit more focused, and I transferred to Cal State Fullerton to pursue animation. 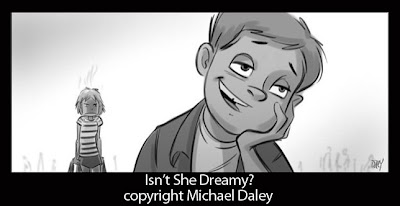 Out of school, I struggled through a bad animation economy to intern at Cartoon Network and eventually to work in downtown LA at a small design studio. Life choices took me up to San Francisco, where I continued to freelance until I was hired at Leapfrog, a children's educational company. I worked as an art director there until once again I decided to move into freelance.

I knew that I wanted to work in feature storyboards. I jumped on any and every story job that I could get! The pay was downright awful, but I needed to get the experience under my belt. This was on top of my animation work. I worked hard and was extremely lucky to eventually land an interview and a job with Blue Sky Studios as a story artist. Now I don't have to work hard at all (kidding, kidding)! 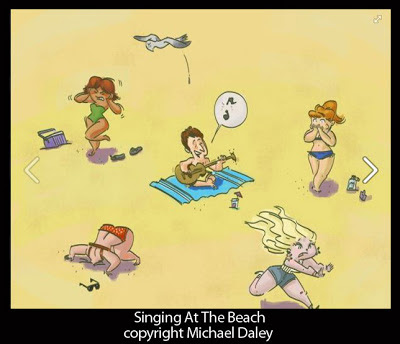 I have found that there is almost never a set script. But sometimes, there will be a very specific idea in mind for a scene. Other times, it may just be kind of a vague idea.

Since most of my work is in animation, there is a lot of leeway for the artist to add physical action and comedy. I find that it is easier to sell some ideas by showing in boards, rather than a description in the script. This is what makes the storyboard process for animation so fun, the amount of invention!

If there is no script, then the process that I use is to get an idea for the scene by having a discussion with the producer, writer and director. Once a direction has been set on, I will usually draw out basic beat boards to outline the structure of the scene before diving into full-on storyboarding. It really depends on the scope of your scene, and how well formed your director's vision is for that scene.

If the scene is short and fairly self explanatory, then I feel confident in just jumping into the boards themselves.

How many Story Artists work on one film and how are the scenes broken up between you? 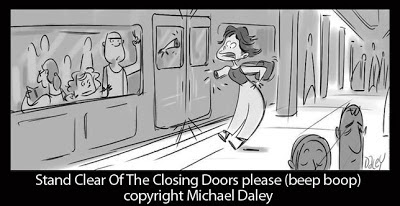 There are anywhere between 1-10 story artists working on any one film at any given time, based on where the production is. Story continues to touch a film from beginning to end. A story artist may be pulled in at the very beginning of a film's production before there is a script to help block out the movie points. A story artist may be attached to the end of a project, boarding little bits here and there, adding jokes or little acting scenarios. I find that a lot of the other departments are surprised at how early and how late the story team is involved.

The scenes can be broken up in many ways, based on a story artist's strengths, or lengths of scenes, or scope of assignments. Someone who is considered great at comedy may be put on a scene that needs to read as really funny. Or, if a story artist has exceptional draftsmanship skills, they may be placed on a scene with a lot of drama and or action. If it's a few scenes or a story thread that needs to be tracked, a few artists might be placed on a small team to tackle that problem.

What are some key rules you have in mind when story boarding a scene/shot? 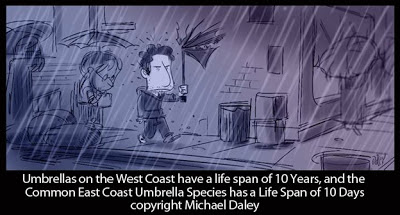 This is a good question, and I think that it's always changing based on what kind of scene you're working on. A rule that I keep in mind, is to tackle the larger problems first, and then work to the smaller problems. This seems like a basic idea, but its easy to forget, especially when you're in the throws of production. I wold love to think that I always work in this way, but it's not always true. Sometimes you're forced to work outside of a set system that you've established.

Keeping open communication with your team is important. Having a good back and forth with the director is key, and leaning on your fellow story artists for brainstorming ideas can be incredibly beneficial.

You're constantly posting new artwork online. How often do you draw outside of work, and where do you find your motivation to keep it up?

Hahaha, well, I have taken a bit of a hiatus from posting artwork online recently, my blog is full of cobwebs at the moment. But, as a freelancer this was my bread and butter. Employers and producers are always drawn to more self-motivated creative types. Updating a blog is a really a great way to keep in contact with the art community and to get jobs.

I still draw a ton outside of work. It's not only my career but its also my passion. Nothing beats drawing an accurate caricature of a friend, or observing a moment on the subway and recording it with a simple sketch. I would say that the motivation comes from wanting to interact with the environment around me in a way that I know. 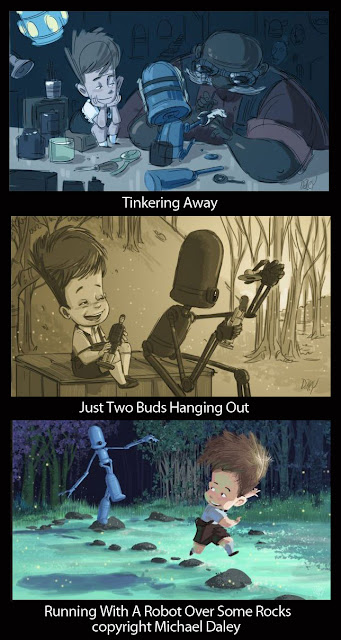 You mentioned that a lot of your inspiration comes from the environment around you. You're able to take a situation, exaggerate it, and make a single image comic out of it. Did you always have this skill or is it something that came with a lot of work?

That is a skill that I will always be working on, probably for the rest of my life. There's always room for improvement and growth, and that's what makes it so fun. There is always a direction to grow and expand. Thats probably a better answer for the motivation question above, haha.

Of course, these skills do require work and dedication. It's like a muscle group that needs to be exercised.

You've posted many images of a boy and a robot. Can you explain a little about this story and where it came from? Any future plans for it?

It's artwork and exploration for a short piece that I was working on with a friend. It was a fun project because I had no idea where it was going and I was creating a few new pieces a week to push the story along. This was a very organic, and not necessarily a fruitful way of working, but it still was very fun and I wasn't bogged down with deadlines or scope.  I'm taking a bit of a hiatus from that project, but it very well may develop into another idea.

Thank you for interviewing with AnimSchool, Mike. To view more of Mike Daley's work, visit his website: http://www.biocreep.com/

Posted by AnimSchool at 8:13 PM