We'd like to introduce Eyad Hussein. Eyad, can you tell us a little about yourself and what 3D experience you've had before entering AnimSchool?

I’m twenty eight years old and I grew up in Amman, Jordan. Since my early childhood, I’ve had a passion for character drawing, and like most artists I started by drawing with pencils, because it was the cheapest and the most available medium. I was obsessed with writing short stories, and while in primary school I developed my first short story by the name of Narcissus and most of the characters for it. After graduating from high school, I obtained a Bachelor’s Degree in Fine Arts at Yarmouk University. During my university years I started learning Maya and used it as a tool to continue developing the Narcissus characters.

Career wise, I worked as a graphic artist in small studios until I got a job offer to work as a Photo Editor at Front Row, the pioneer publishing house in Jordan, where I was responsible in developing, creating and editing photos for six international and local magazines. Shortly after, I decided to focus more on animation, so I applied for a 3D Rigging Artist position at Rubicon Group Holding, the lead animation studio in the Middle East, and got accepted.

Sabine Heller, one of AnimSchool best instructors and a Character Technical Director at Blue Sky Studios, motivated me to join the school. Back in January 2012, when I was struggling with some advanced rigging issues, I got in touch with her and she encouraged me to join AnimSchool. In summer 2012 I got accepted in the 3D Character Program.

Which artists inspire you?

Most of the time, I get my inspiration from movies, video games and people who work in the industry. I love all of Disney and Pixar creations, Tangled (2010) and Brave (2012) are my favorite movies. Three months ago I was very lucky to visit Blue Sky Studios in Connecticut, US, where I met four of AnimSchool instructors who inspired me - Sabine Heller, Chris Pagoria, Ignacio Barrios and Dave Gallagher. I also met the talented people who are responsible for creating the amazing 3D movie Epic (2013).

I always buy books from “The Art of…” series and use them as reference. The last book I bought was The Art of Epic. I would like to say that it’s really amazing, very different from many other books. I like how it presents the character development stages from 2D concept to final 3D rendered character.

I like all of Tim Burton movies and how he develops the characters inside his works. I also like Capcom style, and especially Mega Man. Because I studied Fine Arts, I like to look back into the history of art. I get a lot of inspiration from Roman and Greek sculptures and paintings.

How did you become interested in 3D Modeling and Rigging? What do you enjoy the most? Why?

I was fascinated by Final Fantasy VIII (1999) from Squaresoft and how amazing their 3D characters looked. One day I saw a “making of” for the game on the TV, where they mentioned that they used Maya to model and rig the characters, so I started learning Maya and translating my 2D characters into 3D space. 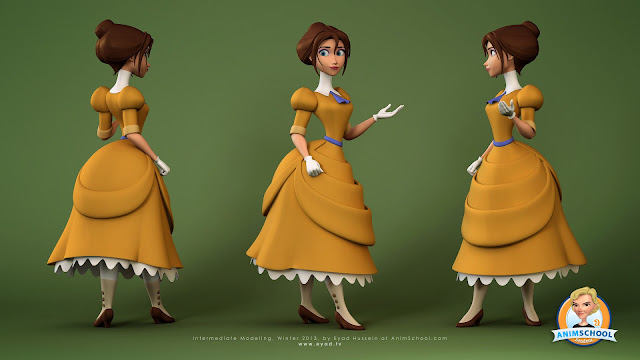 What did you find the most challenging about modeling the character, Jane from your Intermediate Modeling Class?

For me, the main challenge in 3D character modeling making the character look as appealing as its prototype in the 2D design sheet, so that for people it’s love at first sight! 2D artists often cheat in the proportions when they do the posed concept for the character, so another big challenge is to match the 3D model to the 2D concept, or at least give it the same look and feel of the concept. The mission is to put a soul inside the character, so you can feel the personality and the weight of a character when you pose it. You have to make people believe that it’s really alive, and not just a bunch of polygons.

To know more about my process of modeling 3D characters please visit “Winter 2013 Review” at my blog: http://www.eyad.tv/blog/?p=575

As a modeler, how much do you model in ZBrush vs Maya? Can you talk a little about your process using both programs?

Before I start modeling, I like to gather some information about how the character would be used. What would be the purpose of developing this 3D model? Is it a demonstration of a character in 3D space for the movie director? Or is it for paint-over? Or is it going to be used in animation?

If it’s for the director, I mainly use ZBrush, it’s the fastest way to get a result. The director want to see shapes, volumes and the character personality in a pose, so you don’t have to worry about the technical details at all. I used to sketch the character in three days: a day for the head, a day for the body and a day for polishing.

If it’s for animation, it’s almost fifty-fifty.  Most of the time I switch between Maya and ZBrush - I sketch up a quick volume in ZBrush, do retopology in 3D Coat, take the model to Maya and start cleaning the mesh, and then I send the model back to ZBrush to give it the final touches.

What have you found the most challenging in the Rigging process? How did you work through the challenges? Did you discover any tips/tricks? 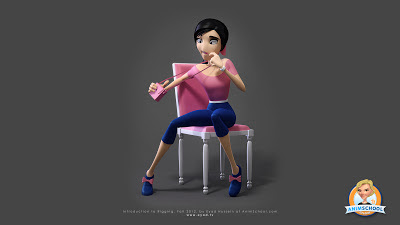 The rigging itself is very enjoyable if you understand the concept, the challenge is always “Efficiency vs. Time”. I think rigging is the art of finding an efficient solution for a specific problem in a period of time.

I get through challenges by following a few important steps. First of all, you have to understand the problem - a problem well stated is a problem half solved, as they say. Second, you have to do a research, which is collecting information to solve this problem. After that, you should try different solutions and pick the most efficient solution for this particular problem. Finally test it! Let other people test it too, so you get feedback.
My advice is “Understand, research, try and test!”

To know more about my process of rigging 3D characters please visit “Fall 2012 Review” at my blog: http://www.eyad.tv/blog/?p=458

How has your experience been at AnimSchool? What is your favorite thing you've learned?

The AnimSchool experience is amazing, especially because the most talented people in the industry are teaching you all of the secrets for creating successful animated movies. I’ve been self-learning Maya for long time, but the amount of knowledge that I got from one year at AnimSchool is almost equal to what I have learned in many years of self-study, so it’s without any doubt a shortcut.

Self-learning is great, but the problem is that there’s nobody to evaluate and criticize your work, so you don’t improve much and eventually bump into a dead end. But as a student in AnimSchool, you receive a lot of constructive criticism from the instructors, which inevitably moves your work to the next level. This is my favorite thing at AnimSchool.

What advice would you give to other artists that want to get into a 3D Character Program?

My advice is to focus on the two sides, modeling and rigging, at the same time because they are so related to each other. To do good appealing rigs, you should be a good modeler. Never give up, keep trying and always share your work with others. 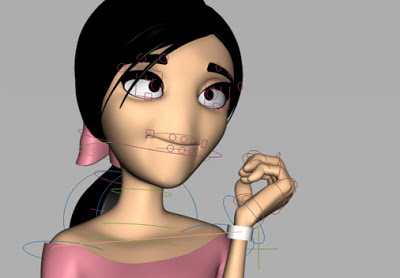 Posted by AnimSchool at 1:22 PM